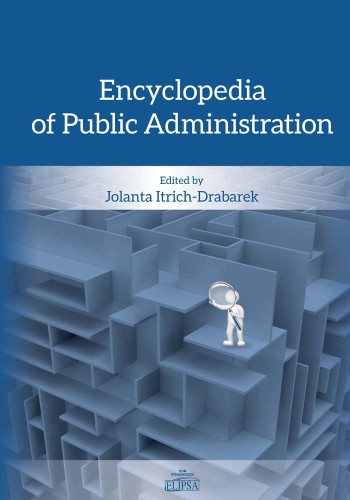 Encyclopedia of Public Administration is the first Polish interdisciplinary encyclopedia covering the issues of public administration, both in the theoretical context and with reference to its functioning in practice. The publication, whose idea was developed by researchers from the Institute of Political Sciences at the Faculty of Political Science and International Studies of the University of Warsaw, was prepared by scientists from eight Polish universities. Readers seeking knowledge and information on such issues as democracy, the system of public authorities in Poland, including local and regional self-government authorities, rules governing the practice of the functioning of offices, issues regarding officials and professional ethics, and finally forms of citizens’ participation in co-governance and their rights in relations with the public administration system, will appreciate the several hundred entries. Issues related to the functioning of the Polish administration in the structures of the European Union are also taken into account. This list does not exhaust the extensive range of entries. The Encyclopedia is addressed to various readers – the scientific community, students, representatives of public administration or citizens seeking information about the system of public institutions and the rules governing their functioning. The authors of the entries are authorities in the field of law, state systems and political issues of public administration, such as Professors Hubert Izdebski, Robert Kmieciak, Izabela Malinowska, Stanisław Mazur, Andrzej Misiuk, Jacek Sroka, Jacek Wojnicki and scientific editor of the volume Jolanta Itrich-Drabarek, Head of the Department of State Sciences and Public Administration at the Faculty of Political Science and International Studies, University of Warsaw.